Learn how to make pretty code screenshots and impress your developer friends on Twitter!

If you're a developer, and you hang out on developer Twitter, then you'll have seen people sharing their hot code tips. They're often accompanied by code examples and the "hot tip" fire 🔥 or lightbulb 💡 emojis.

These are not ordinary code screenshots straight from a code editor. They contain the code, syntax highlighting for the language, and are often embedded in a browser window with a colourful background.

🔥 It's a beautiful code screenshot!

If you read the comments on these code tweets, you'll usually see a list of people asking how to create such pretty code screenshots. So how do we do it? 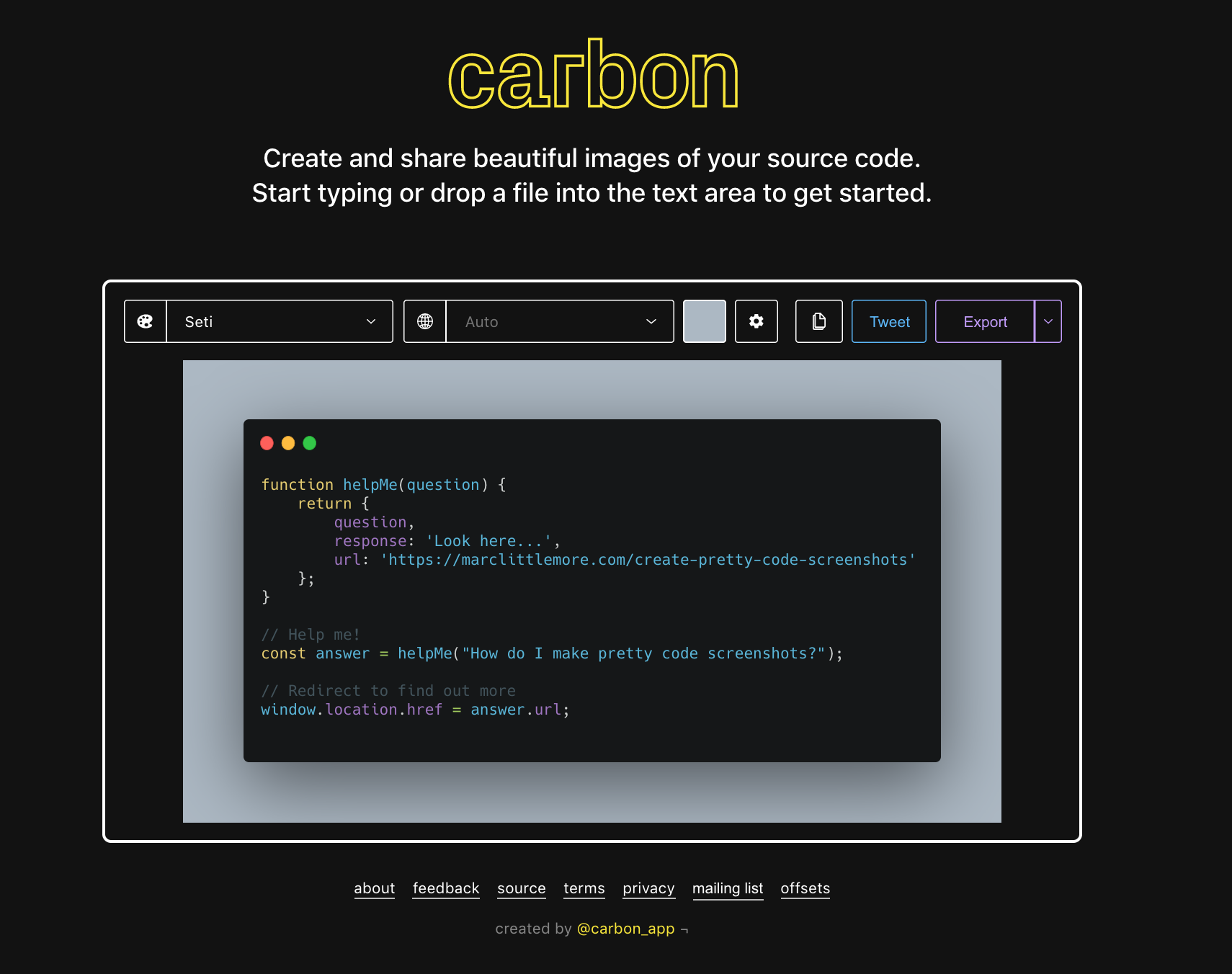 Carbon is one of the easiest tools to use. There are no applications or extensions to install. You can quickly create great looking code screenshots on their website. Their code is also open source on GitHub if you want to use it yourself.

Type your code into their online editor and you can see a prettified version of it inside a Mac-styled window. It allows you to choose a variety of code themes and can syntax highlight your code in various programming languages. You can also alter the background colour, padding, and many other window or editor options. Play around with it to see what you can create. 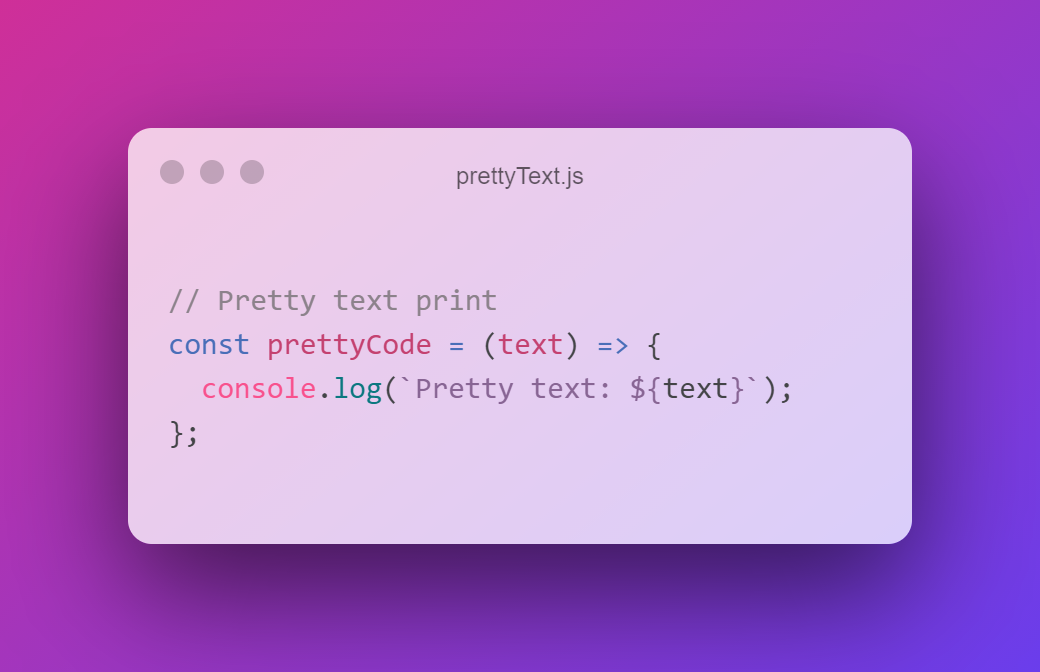 Ray.so is another easy site to create beautiful screenshots. It's created by the team behind Raycast and it's a lot more opinionated than Carbon. It only allows a minimal set of colour options but does have both light and dark modes. It supports lots of languages with its syntax highlighting support, allows you to change the title of the window, and also the padding. It offers a more curated experience than Carbon but it's similarly easy to use.

Chalk.ist is a new site which I found on Twitter in April 2022. It's created by a developer called Kasper Mikiewicz and adds some additional features to the normal code screenshot idea. It allows you to add your Twitter handle if you enable it. This will be great for social sharing.

Another useful feature is a code difference view, like you'd see in your code editor. This is useful for sharing development tutorials or for teaching. While it currently only offers 3 colour themes, it does give you line numbers and a reflection to make it look different to the other sites.

Permalink to "VS Code extensions"

If you're a developer who uses VS Code there are a couple of extensions which will make creating pretty code screenshots incredibly easy. VS Code extensions add new features, themes, and more to the editor. If you install one of these extensions, you can avoid the need to use an external website and screenshot your code instantly.

I've used this extension for a while and it's an easy way to create shareable screenshots of your code without leaving the editor. Install it via the extensions sidebar as you would with other extensions. You can then use the command palette to choose Polacode. This will bring up a new tab where you can cut and past code into the Polacode window. 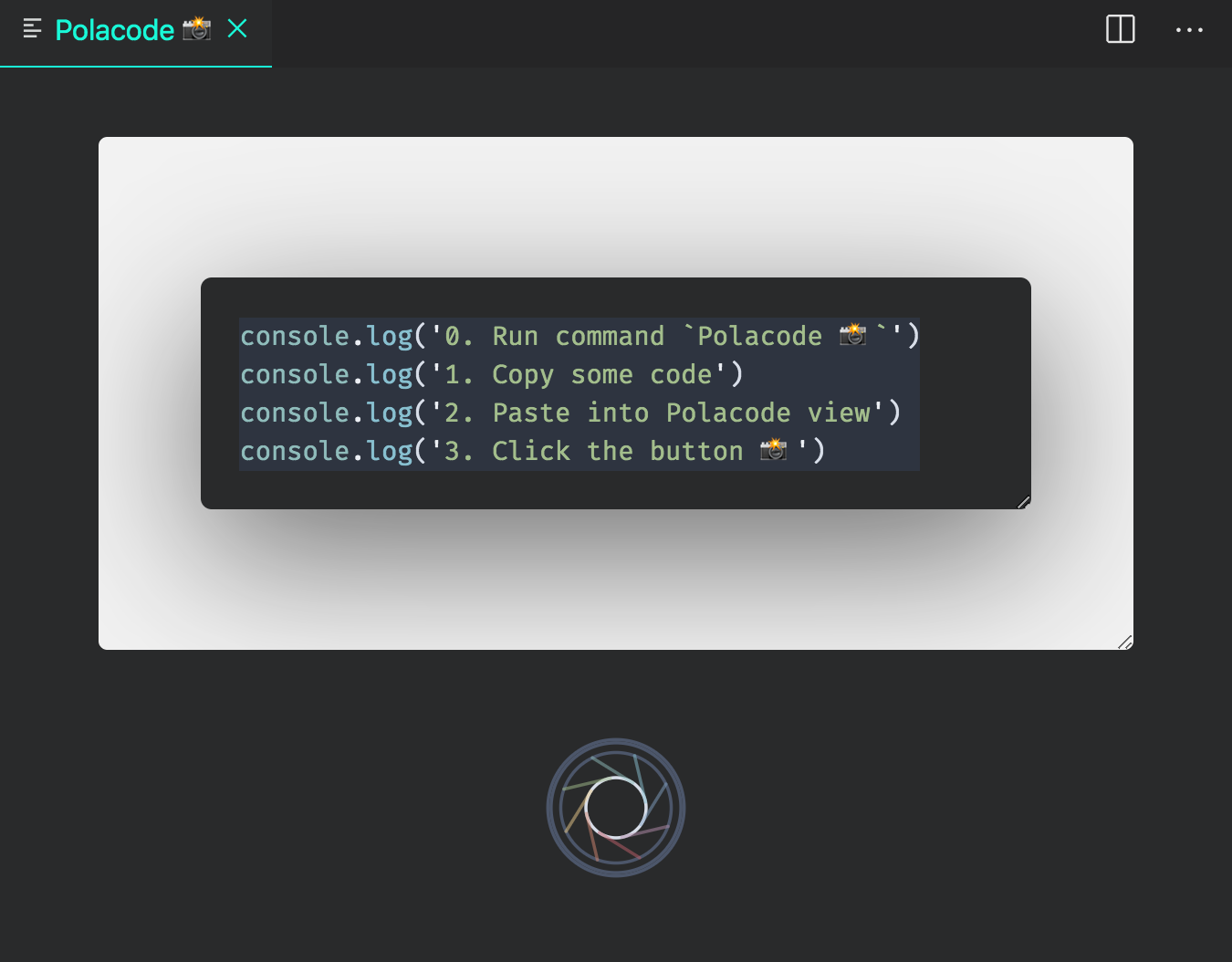 Cutting and pasting code from your open project will allow Polacode to match your current theme. Hit the button underneath the code snippet and you'll get a lovely code screenshot to share. You can update the background colour and shadow using VS Code's settings for the extension. The only issue I have with this extension is that it struggles with longer lines of code. These often wrap onto the next line which isn't as aesthetically pleasing. For this you'll have to edit the code yourself, perhaps using Prettier or similar.

Similar to Polacode, CodeSnap is another VS Code extension. Again, you can easily install it via the VS Code extensions sidebar. CodeSnap is a bit more fully featured than Polacode and allows more adjustments in the settings menu. It also has quick access by right clicking in the current window to choose it from the pop-up menu. 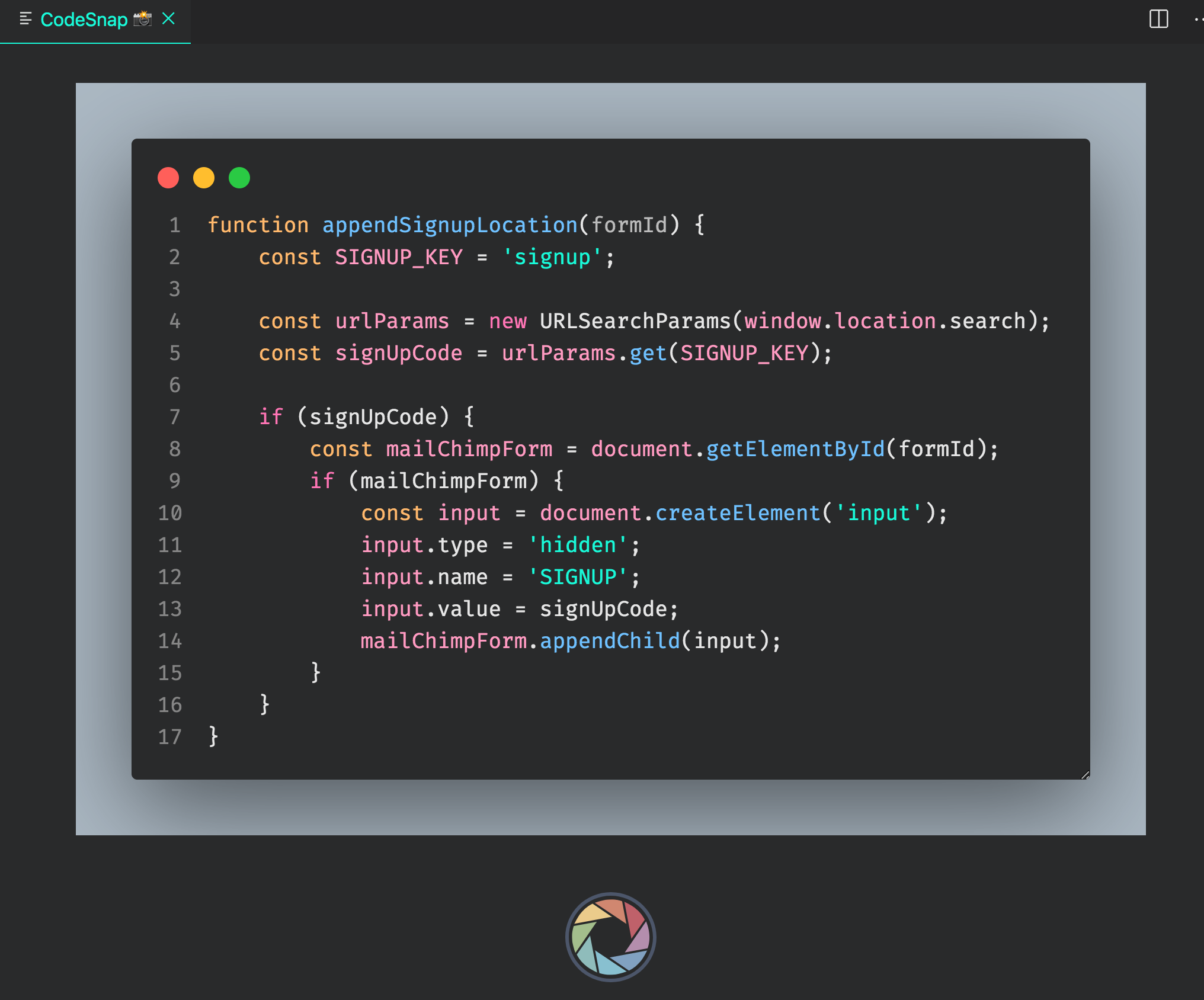 One of the advantages of CodeSnap over Polacode is that it automatically captures any text in your clipboard and creates a pretty code screenshot based on that. It's also attempts to

In some cases you might not need to take screenshots of code. Instead you can make pretty screenshots of websites, photos, or any other image you might have. There are a few ways to do this. 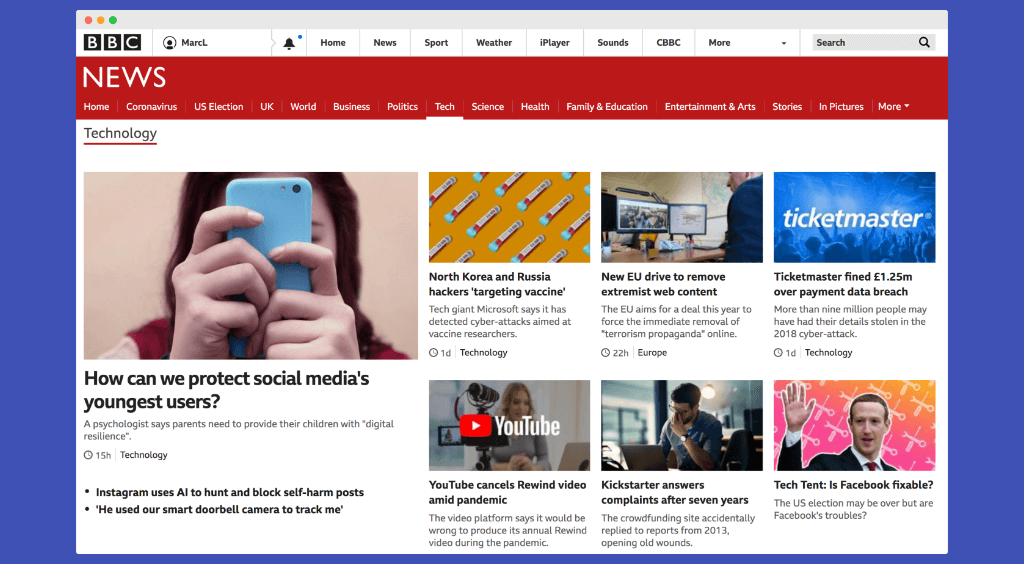 Screely is a great website which works in a similar way to Carbon. It allows you to use any image file and displays it in a browser-style window. Again, you have the ability to style the image with a variety of options for the background colour, padding, and window type and style. Have fun and make your non-code images beautiful too.

Permalink to "Using your operating system"

While there are websites and code editor extensions you can use, maybe you just want to use your operating system. You can just take screenshots of your code using Windows or Mac OSX. You'll have your styling and code theme exactly the same as you see it on the screen. Let's look at how we can do that.

Windows 10 makes it simple to save a copy of whatever is on your screen by using the "Print Screen" key on your keyboard. This if normally labelled as PrtScn on a Windows keyboard and is often located on the top row near the function keys. On laptops, you often have to hold down the function key first before pressing PrtScn.

Don't forget that posting screenshots of code aren't accessible. Make sure that you add a link to a GitHub gist or to your code repository so that people with any visual impairments can read your code in other ways.

Got any other ways to style your images that I've not mentioned? Send me a message and let me know. You and me both 😆 Slick or just my terrible memory. You decide. 😂

Become a producer not a consumer

Learning doesn't have to stop after school. Learning should be a lifelong passion that we all embrace.

I sometimes struggle for ideas, especially as I try and a daily blog post for 30 days. Here are a few ideas on how to kickstart a habit of idea generation.